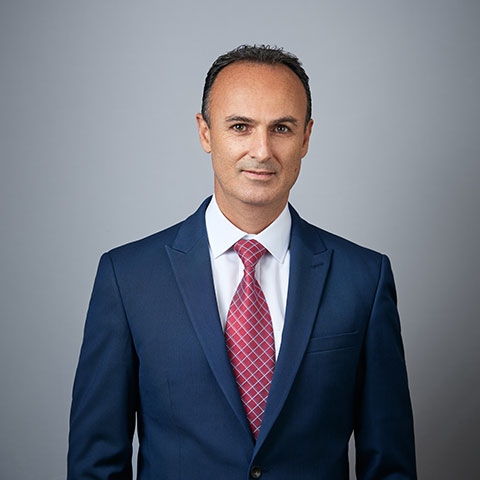 Petros Iacovides was born in Larnaca, Cyprus. He read Law and Economics at the University of Keele, England, and in 1990 was awarded a Bachelor of Social Science Joint-Honours Degree. In 1991, after passing the pre-qualification exams of the Cyprus Bar Council, he was admitted to the Cyprus Bar. He then joined M&M as an Associate. In 1992 he was called to the English Bar by the Honourable Society of Gray’s Inn after completing the Bar Vocational Course at Holborn Law College, London.

In 2007 he became a Partner in the Firm and in 2020 became Joint Head of the Litigation Department.

His main areas of practice are maritime & commercial, both contentious and non-contentious, and employment law.

Throughout his career, Petros has represented local and foreign clients before all the Civil Law Courts of Cyprus on either purely local cases or cases involving a multi-jurisdictional element. He advises and assists foreign clients in registering and enforcing foreign court judgments and foreign arbitrations in Cyprus, as well as in obtaining interim conservative measures in aid of foreign proceedings. On numerous occasions, he has been instructed and given evidence and legal opinions as an expert on Cyprus law in court proceedings in foreign jurisdictions. He was a member of the consultancy team of expert maritime practitioners that in 2020 assisted the Rules Reform Committee of the Supreme Court of Cyprus in drafting  the new Admiralty Rules of Cyprus.

Petros regularly acts for International Group P&I Clubs, ship-owners, charterers, cargo owners and banks on contentious and non-contentious matters. He is the contributor for Cyprus to an online maritime publication of a major IG P&I Club, as well as to The Legal 500 Shipping Comparative Guide.