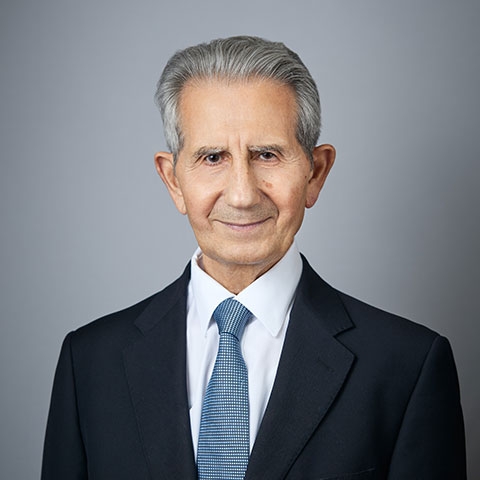 Shipping
P & I and Defence
Aviation

Eric (Eleftherios) Montanios was born in Famagusta on the Island of Cyprus.

He qualified as a Barrister-at-Law at the Middle Temple, London.  He joined his father’s, Michael Montanios, practice as a trainee advocate in November 1966 and continued as a qualified advocate from August 1967. In 1969, with his father and founder of the Firm, they formed a partnership under the name Montanios & Montanios.  He is now the Senior Partner and Honorary President of Montanios & Montanios LLC.

At the start of his career he dealt, on behalf of overseas clients, with the incorporation of shipping companies and the registration of ships under Cyprus flag.  He also acted on behalf of multiple international banks in connection with the Cypriot aspects of ship financing transactions.

In more recent years, he has dealt with maritime litigation, mainly cases involving enforcement of mortgages on ships, as well as disputes in which he represented P & I Clubs, some of which the Firm represents as their listed legal correspondent in Cyprus.

He was awarded the Cyprus Maritime Personality Award for 2015 by the Ministry of Transport, Communications & Works and the Cyprus Chamber of Commerce and Industry’s 2016 Business Leader Award in Financial and Professional Services.

He served as Chairman of the Maritime Law Committee of the Cyprus Bar Association from 2002 to 2009.

In 1999, Eric was one of the two Cypriot advocates nominated by the Cyprus Bar Association to attend the United Nations Diplomatic Conference in Geneva on the Arrest of Ships as members of the Cyprus delegation.

Apart from shipping, since 1981, he has dealt extensively with legal aspects of the sale, leasing, financing, registration and deregistration of aircraft.

He is the author of the Cyprus chapters in the international publications "Aircraft Finance – Registration, Security and Enforcement" (1989) and ''Aircraft Liens and Detention Rights'' (1998) (both now published by Sweet & Maxwell, London), which he regularly updates.

In 1991, the Oriental Republic of Uruguay appointed Eric (Eleftherios) Montanios as its Honorary Consul in Cyprus, an appointment he continues to hold. In recognition of his consular services, he was awarded the Medal of the Ministry of Foreign Relations of Uruguay in 2012.